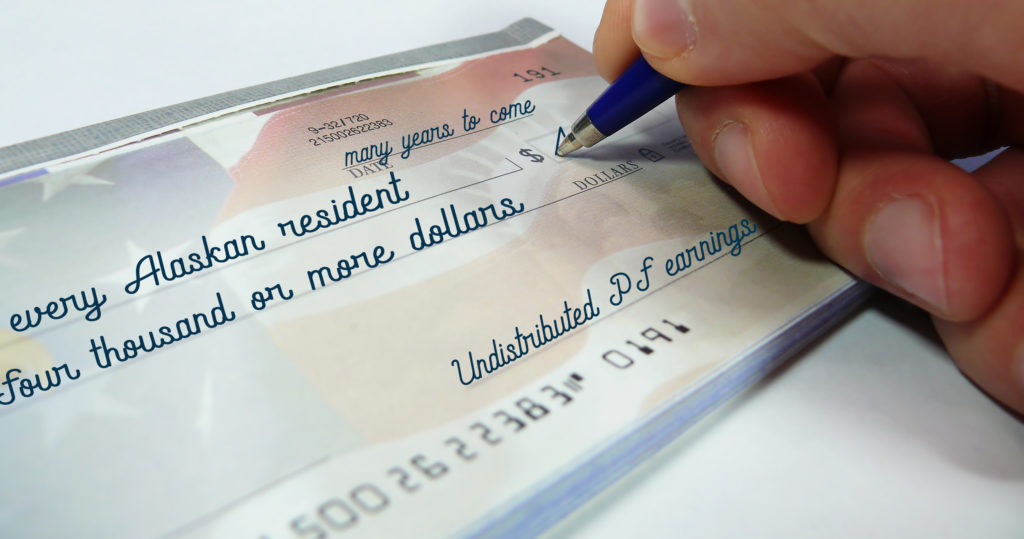 The legislature should authorize large PFDs!

Once upon a time, there was vast piece of property – a paradise – with almost unimaginable resource wealth. The ‘owners’ wisely formed a ‘corporation’ (the State of Alaska) to govern all the people who would pioneer the paradise to ensure fair ownership and management of the wealth. One goal was to prevent greedy exploitation while respecting the individual right to own property (and all other inherent human rights). The people of Alaska approved the ‘corporate structure’ (constitution) defining a shocking system of natural resource ownership and management that had not been attempted in the 48 previous States. The people of Alaska approved a constitution that theoretically could eliminate the need for petty taxes by authorizing a large share of the resource wealth before it could be taxed or owned as private property! By ratifying the constitution, we swapped the potential for individual, private resource ownership, (even on private property) for a potentially generous revenue stream to pay the expenses for state government services (infrastructure, schools, agencies…).

Most (75%), but not all, of the pending wealth from resources is kept by the State to pay State expenses! Natural resources are to be managed, conserved, and utilized for “sustained yield” and “the maximum benefit” of its people (8.2&4). The history of Alaska has been profoundly influenced by government getting this huge cash flow with no need to seek public support for tax laws.

Early Alaskans could not have anticipated the vast return from oil and they trusted traditional safe-guards in the constitution to prevent potential big government abuse. For one thing, only the legislature has the power to appropriate funds (sign the checks). Theoretically legislators can only stay elected if they spend money their constituent voters tolerate. Who could have guessed the sophistication of the pressure to spend the windfall oil wealth? Untraditionally, $2.50 of every $10 (25%) was diverted into a restricted account (the Permanent Fund or PF) that could not be appropriated by the legislature – at least not as normal budget-balancing revenue! The resulting history of this unique element of our Constitution (9.15) is riveting! The legislature subsequently devised a ‘trust-like’ program to manage this money. The idea was to invest the PF and pay owner dividends from the investment proceeds. Again, who could have anticipated the outstanding success of this investment program that paid dividends and create a huge reserve?

Now government insiders feel the urgent need for more than the 75% “pre-tax” revenue (easy money) to maintain over-spending. We see them maneuvering to get at the earnings reserve! Imagine how well it would be tolerated if a financial trust manager took money from one client account to spend for any reason! Even many respected legislators and governors have so speculated.

It is time for the legislature to blow everyone’s mind and ‘double down’ and significantly INCREASE the size of PFD checks! We should not resort to the risky, political thrash of a constitutional amendment or any state-wide vote on the PFD. A better answer is a plain-language statute enacted by a simple legislative majority (21 Representatives and 11 Senators). This would clarify constitutional values by maximizing the PFD, thereby confirming ownership! Undistributed PF earnings could easily pay $4,000 dividends for many years and still maintain a multi-billion sustainable investment principle!

Current law is already on the books for setting for the ‘appropriate size’ of PFDs. An adjustment would merely tweak some percentages with the goal of maximizing PFDs while sustaining an appropriate fund balance. It could be a one-page bill! In several years, if the projections are wrong, the law can be adjusted again, like a ‘control knob’ to sustain distributions based on investment income. All that is needed is a legislative commitment to do the right thing! If this seems radical, it is only because it has not been fairly assessed for fear of popular opinion.

In my opinion, there have been bogus arguments made for keeping the PFD small. These arguments need to see the light of day. One such argument bemoans the money that would go to the federal government because of increased federal income taxes… the implication being citizen income is ‘regressive’ and should be diminished. The people need to hear their elected legislators openly debating these ‘red herrings’.

New taxes are a completely different issue! It is confusing and misleading to mix debate on taxes with a debate on who can best spend ‘contested-ownership’ money! Simply taking more “pre-tax dollars” from PF earnings is arguably a violation of the values of our constitution because it presumes government ownership. The legislature can easily confirm the ownership by maximizing the PFD if they are convinced that is what Alaskans want! Once earning reserve ownership is clarified by a demonstrated commitment for PFD disbursement, THEN, and only then, can a proper decision be made on taxes.  Because we would be fools to go bankrupt with our billions of dollars of natural resource assets, the only options are to pay taxes or make real spending cuts. The false hope of getting the PF earnings should be annihilated as soon as possible.